Home Attention Insurancemarket : The first FlyDrive car has been licensed for the...

This article is also available in the Dutch language LINK 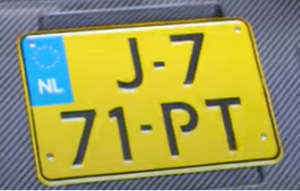 Who doesn’t dream of flying your car? “The global market is then worth about 1400 to 2900 billion dollars. ”
Fly over your country!
Shave your car over the Netherlands!
This dream is now one step closer.
After today, you should not be surprised to see a flying car on the highway. Soon they’ll fly passing you. 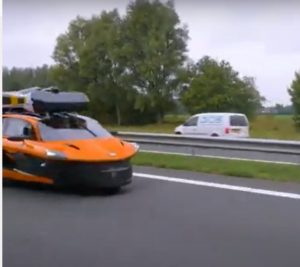 The PAL-V Liberty from Raamsdonkveer is the first flying car approved for use on public roads.
D
The Liberty had to pass numerous tests before obtaining the approval, such as :
The tilt test: Do not tilt when a sharp bend is used at high speeds.
(Especially with a set of blades on your roof, that’s no mean feat.)
The Brake test:  Come to a quick stop at full speed. (Also with full load.)
Burning hell : Yes also the test about fire safety was not spared the PAL-V.
etc. etc.

With this approval, PAL-V is one step closer to the moment when the Liberty is granted the “airworthy” certificate also.

Mike Stekelenburg, CTO of PAL-V, about his experiences during this period: “We have been working with the road managers for many years to reach this milestone.

It was and is a huge challenge for me and for the entire design team at PAL-V to ensure that the design complies with both air and road regulations. ” (1)

Sensational experience
Because the PAL-V has to pass endurance tests in the coming months, everyone can now come across the PAL-V. “Turning the key and hearing how the vehicle comes to life was just beautiful and driving is amazing. This vehicle drives very smoothly and responds excellently to the steering and with a weight of only 660 kg it accelerates like a sports car. A sensational experience. ”

The experience gained during the Pal-V ONE test programme is invaluable for the Aerospace Certification of the Pal-V Liberty.

Extra Safe
The Pal-V is not a helicopter but a Gyrocopter. In case of engine failure, a Gyrocopter can simply land on a very small space. A tennis court is enough.
The pal-V LIBERTY’s unique dual powertrain plays an important role in this. All this makes an emergency landing with a PAL-V many times safer than an emergency landing with a similar aircraft.

With the delivery of the PAL-V Liberty fast approaching, it’s time to have a limited flight license needed to use the PAL-V to take to the skies. Since 80% of PAL-V’s current customers do not have one at the time they buy one, PAL-V has increased its training capacity so that all customers have a license on time as soon as their vehicle can be delivered to the dealer.

International Certification
Unlike most small aircraft and other Gyrocopters, the PAL-V LIBERTY is certified under the very strict safety regime of EASA (Europe) and FAA (USA). Many countries in the world follow the same rules.

In bad weather ‘Just hit the road Jack’
An inherent safety aspect is that in bad weather conditions one can (part of) travel driving/complete. This makes the planning much more secure, but also increases the safety aspect drastically.

Rules and legislation
The design of the PAL-V LIBERTY falls entirely within the current certification and regulatory frameworks for most countries. Therefore, there is no need to change rules or regulations in those countries in order to be allowed to use the vehicle there.

City-to-City of Fly Only
CEO Robert Dingemanse : “We distinguish two markets in the field of personal flightmobility:
– Fly Only = urban mobility and
– City-to-City = regional mobility.
At the moment PAL-V strives for City-to-City mobility. So you first drive to a location outside the city, then choose the airspace, to land near another city, after which you continue the journey by road to the destination. After all, the shortest route is the one that goes from A to B by air.”

Flydrive
The essence is that the flight mobility of the future has two basic applications that are very different: Flydrive and FLy only.
The problem is that everything is called a flying car, whereas only a FlyDrive vehicle will also be found on the road: door-to-door transport.

Fly Only
The FlyOnly solution could actually be called air metro or airbus because these drone-like planes are going to take us from station to station like a bus or a subway and usually not from door to door.

Skydrive
In 2023, for example, the Japanese Skydrive  will come to market for between 300,000 to 500,000 US dollars. The Skydrive does not require a runway and is therefore designed for urban environments.

Why choose City-to-City mobility?
Dingemanse continues: “There are several reasons why PAL-V has deliberately opted for City-to-City mobility. One is that no additional infrastructure is needed to support a vehicle like the PAL-V. Because you can fill up the PAL-V at any petrol station with EURO unleaded, you don’t have to visit an airport. Because you can park your PAL-V in your own garage, there is no need for a hangar.

The PAL-V only needs a grass strip or a country road for landing or to take off. Such locations are abundantly available or to be identified. Because the PAL-V complies with the existing regulations, it is also allowed to land at public airports or airports for the sports flying industry. Since all regulations already provide for the use of the PAL-V within the framework of city-to-city mobility, the PAL-V is the first flying car without barriers.”

The flying car has a longer history.
The first serious attempt to put a flying car on the market took place in 1917 when Glenn Curtiss built the Autoplane.  Despite that, a little hopping up and down was unfortunately not in it yet.
D
Why not choose urban mobility?
Dingemanse: “We are convinced that there will be a market for urban mobility. However, not for the next decade. There are a number of major challenges that need to be addressed. One of them is the noise that planes make. The PAL-V is relatively quiet compared to helicopters, but it still produces propeller noise. Although you’d think electric motors would solve that problem, it isn’t. The main source of noise pollution comes from the blades of the rotor and propeller, especially when using drone or helicopter technology. The other challenge is the level of safety needed to fly over urban areas. In addition, new regulations must be put in place and the infrastructure must be created in the form of traffic management and traffic management.”

Four scenarios
If the market for flying cars breaks open, there is a serious amount of money involved. The Boston Consulting Group (BCG) has drawn up four scenarios for the roll-out of flying cars by 2030. If technological development falters, infrastructure and safety fails and regulations are not favourable, BCG expects 10,000 flying cars by 2030. If all problems are solved, BCG estimates a market of 60 million units together make 825 billion flight movements. The turnover is then estimated at $2300 billion. Analysts at Morgan Stanley are getting rid of it a little easier. They claim that the flying city taxi is the new normal in 2040. The global market is worth about $1,400 billion to $2,900 billion.