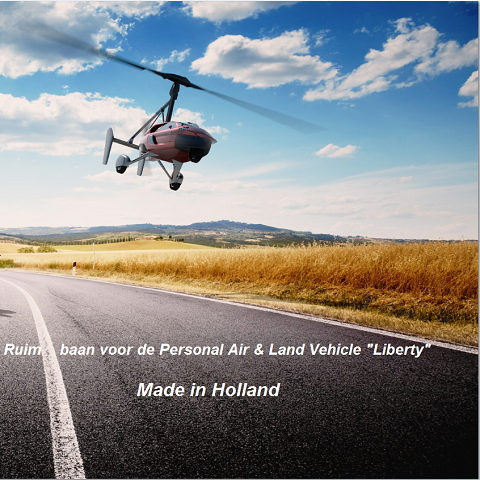 : COULD THIS BE
THE FIRST ‘REAL FLYING CAR ?

VIDEO
It’s 50 years since the Jetsons first predicted we’d be flying the family about in airborne cars.
And experts say we are tantalisingly close to the dream becoming reality.
They have voted the Pal-V One Helicycle, a two-seat hybrid car and gyrocopter, the ‘most likely to become a reality.

The Pal-V craft switches between drive and flight mode in just 10 minutes, and the Pal-V One Liberty edition will be delivered next year to the first customers.
Maxim magazine recently selected PAL-V as the most likely company to deliver a ‘real’ flying car.

‘Clearly it is impressive that a magazine with a readership of close to 9 million people would recognize the work we have done to create a flying car that actually conforms to existing regulations and is safe to fly,‘ said Robert Dingemanse, the firm’s CEO.

He promises ‘significant updates’ in the next several months as the firm begins manufacturing of the PAL-V Limited Edition model. The firm also says it is ‘very advanced’ in certifying the product in Europe under EASA CS 27 regulations.

Once finalized this will allow them to certify under FAR 27 regulations on this side of the Atlantic.

The firm says its design is ‘The ultimate vehicle to go wherever and whenever you want to, easily overcoming all sorts of barriers.

‘Now you can leave home and fly-drive to almost any destination! Avoid traffic jams and cross lakes, fjords, rivers or mountain ranges like an eagle.

‘Land on the other side and drive in your own vehicle to your final destination.‘